Proverbs 30:4-6 speak of a mystery, particularly to followers of Judaism, as it asks the question, what is God’s Son’s name?

Who has ascended into heaven, or descended?
Who has gathered the wind in His fists?
Who has bound the waters in a garment?
Who has established all the ends of the earth?
What is His name, and what is His Son’s name,
If you know?

5 Every word of God is pure;
He is a shield to those who put their trust in Him.
6 Do not add to His words,
Lest He rebuke you, and you be found a liar.

But now, if we take those verses in Hebrew, which runs from right to left, and lay them out rows of 22 letters per row (which is quite elegant, since Hebrew has 22 letters), here is what we find: 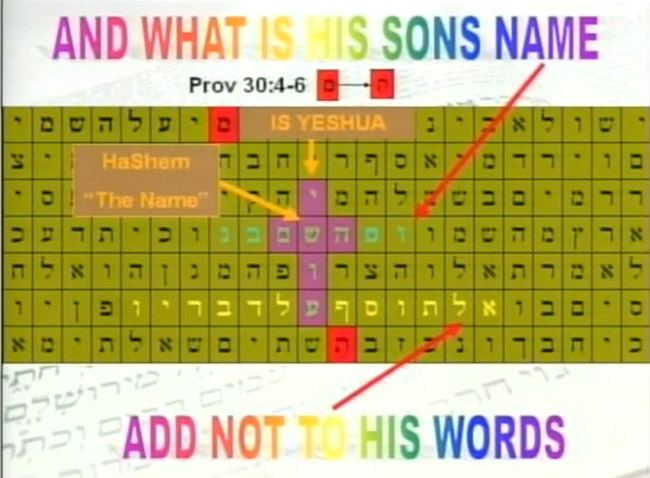 We could call this the Proverbs 30:4 Symmetry; the red squares note the start and end of verses 4-6. The green text (seven characters long) are the words “what is his son’s name”. The yellow text states “add not to his words”. The horizontal purple text spells “Hashem” (or “the name” which is the Jewish traditional reference to God’s name), and the vertical purple text spells “is Yeshua”. So together, the purple text spells “the Name is Yeshua”.
Although in itself, this proves nothing, it is nevertheless noteworthy because of the perfect cross form symmetry of the positioning of the two statements in purple, as well as their symmetry with the previous words, and the fact that this the name “Hashem” is perfectly inside of “what is His Son’s name” and both are tied together by the words “is Yeshua”.
See a video on this here.

This entry was posted in Prophecies-Messianic, Thematic and tagged code, symmetry. Bookmark the permalink.