The Riddle of the Sphinx and the Zodiac 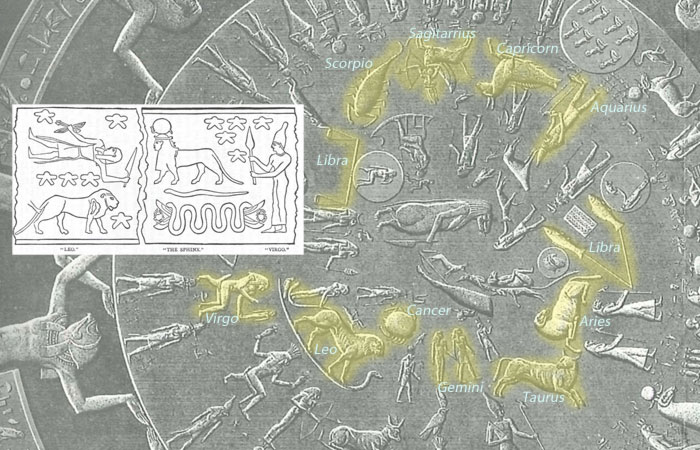 The Riddle of the Sphinx and the Zodiac

Scriptural references and ancient sources demonstrate that God calls the constellations by their names, that constellations start with Virgo and end with Leo, and this order could very well be divinely orchestrated.

The larger image above is from the Dendera zodiac from the ceiling of a chapel dedicated to Osiris in the temple of Hathor in Dendera, Egypt. The various constellations have been highlighted and named for easier understanding. This bas-relief is dated variously from 3500 BC to 50 BC, and is currently on display at the Louvre.

The inset image is from the Temple of Esneh in Egypt. An image of s sphinx is placed between the signs for Leo (on the left) and Virgo (on the right, holding a branch). The word sphinx means “to bind closely together” (from the Greek Sphiggo). This indicates that this is the point at which the constellations begin and end. And, like the head of the sphinx, which is that of a woman, the constellations begin with Virgo, and end, like the tail of the sphinx, which is that of a lion, with Leo.

The True Riddle of the Sphinx

Scriptural reference that God calls the constellations by their names (Psalm 147:4):

He counts the number of the stars;
He calls them all by name.

Scriptural reference that God sees over the constellations (Job 38:31-33):

31 “Can you bind the cluster of the Pleiades,
Or loose the belt of Orion?
32 Can you bring out Mazzaroth (constellations) in its season?
Or can you guide the Great Bear with its cubs?
33 Do you know the ordinances of the heavens?
Can you set their dominion over the earth?

Scriptural references for the virgin and her baby:

14 Therefore the Lord Himself will give you a sign: Behold, the virgin shall conceive and bear a Son, and shall call His name Immanuel (which means God with us).

6 For unto us a Child is born,
Unto us a Son is given;
And the government will be upon His shoulder.
And His name will be called
Wonderful, Counselor, Mighty God,
Everlasting Father, Prince of Peace.
7 Of the increase of His government and peace
There will be no end,
Upon the throne of David and over His kingdom,
To order it and establish it with judgment and justice
From that time forward, even forever.
The zeal of the Lord of hosts will perform this.

Scriptural reference for the Lion of Judah (Revelation 5:4):

4 So I wept much, because no one was found worthy to open and read the scroll, or to look at it. 5 But one of the elders said to me, “Do not weep. Behold, the Lion of the tribe of Judah, the Root of David, has prevailed to open the scroll and to loose its seven seals.”

Read more in-depth about the evidence here on Mazzaroth.com.